Flights to Portugal are Cheap in Fall 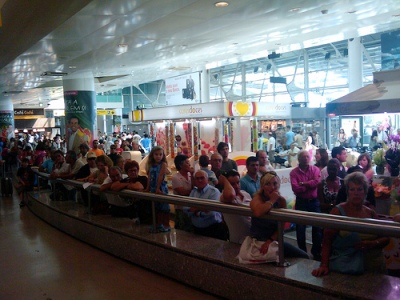 Portugal is a charming European country, which fascinates the traveler with its cities, culture, countryside and beaches. Having one of the warmest climates on the entire continent, Portugal offers tourists the possibility to spend a beach vacation in September and even October, when most of the continent is starting to shiver and curse the rain.

The majority of travelers arrive in Portugal on a flight. Thankfully, due to the number of direct and indirect flights available, it’s easy to find cheap tickets from both Europe and Northern America.

The country’s main airport is located in the capital of Lisbon. It is one of Europe’s largest airports and is served by many carriers. As a result, cheap international flights are just as common as if you were flying into Paris, London or other major European hub. And the Europe airline tickets are often dirt cheap as the airport is served by a variety of low-cost carriers including: Aer Lingus, bmibaby, Blue Air and EasyJet.

Tips on finding the cheapest ticket

September in Portugal is still a month when travelers can enjoy the beach activities. It’s not scorching hot anymore and many prefer to push their vacation plans in September in order to save some money.

Direct flights to Portugal from the United States are available. One choice is to fly from New York and you can opt for United Airlines, Continental Airlines or TAP Portugal. In mid-September a round-trip flight starts at $648 per person. Cheaper flights are available on Iberia but you are required to make a stop-over in Madrid (Spain). By early October the indirect flights are still cheap but the direct flights can be quite expensive (starting at $708 per person).

Although we often hear that it’s cheaper to fly into a larger European hub, such as Paris or London first and then choose another way to travel to Portugal, this is not always the case. For example, in mid-September, a round trip ticket from London to Lisbon starts at $167 while a direct round trip flight from New York to London starts at $600. Total cost: $767 which means you are better off choosing the direct flight from the US to Portugal. However, this tactics might work when you have time to book the flights quite far in advance and allow for longer stays in London or Paris, for example.

The cheapest option however would be to fly into Madrid and then catch low-cost flight to Lisbon. In mid-September a round trip ticket from New York to Madrid starts at $582 while a low-cost round trip flight between Madrid and Lisbon starts at $56. Total cost: $638.