Five of Europe’s most notorious hostels 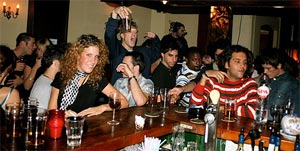 It’s a strange phenomenon that many of Europe’s most famous hostels are also the ones that get the most criticism. Perhaps the best known places attract the most newcomers to the hostel game, so these places are often filled with people who’ve yet to learn the standards of common decency for hostels yet? Or it could be that these are some of the largest hostels in Europe’s largest party cities, so the ratio of careless drunken idiots to rational people is extremely high?

Your guess is as good as mine, but here is a list of five famous hostels that seem to have as many detractors as they have fans, at least among the hardcore hostel crowd:

It could come from the Pink Floyd reference in the name, but this major party hostel is the most famous in Amsterdam, and it’s almost always filled with pleasure-seekers who don’t know their own limits. The location is excellent and their public facilities (including a great bar) tend to get rave reviews, but this is a place many people will avoid on their second trip to the Dutch capital.

This big hostel with an excellent location right on the Plaza Real has actually been greatly renovated in recent years, so previous guests may be holding an outdated grudge against the place. But still, this has become well known as a party hostel in a city with few peers in the partying ranks. Newcomers will find a new bar and reception room, and then will proceed to drink too much and stay up all night screaming anyway.

You might not expect a hostel in postcard-perfect Brugge, Belgium to make this list, but the Bauhaus Hostel is another popular place with a great location, a party atmosphere, and frequent complaints that it is one of the dirtiest hostels on the Continent. It’s a cheap place in a popular city, so it fills up most nights anyway.

This huge place has over 150 rooms and also has people raving about it’s great location near the London Bridge as well as its on-site bar, but previous guests often say the place is otherwise a hellhole. Some complain about poor service and other people complain about the filth and uncomfortable beds, but people keep coming and most of them seem to have a ball.

This large hostel with a convenient location near the main train station has a lot of fans due to it’s good facilities and private bar, but other previous guests will instead tell you about the dangerous and dodgy neighborhood or the flea bites they came home with.