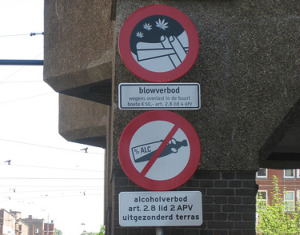 Most of the time, when you say you’re planning to travel to Amsterdam you’ll get nods and knowing looks from friends and fellow travelers who think you’re going to spend your whole trip in an Amsterdam coffeeshop stoned out of your mind. Now, you might visit a coffeeshop or two during your stay, and you may smoke a fair amount of weed as well. But even if you’re not interested in the many non-marijuana-related reasons to visit Amsterdam, you might not want to spend your nights in a place that’s cloudy with smoke every night. If that describes you, you’ll be pleased to know that isn’t the difficult task it used to be.

In July 2008, Amsterdam joined the ranks of the cities and countries around the world that have instituted smoke-free laws. In a city like Amsterdam, where smoking is one of the things people come to Amsterdam specifically to do, that’s posed some challenges. The many coffeeshops around the city still have plenty of smoking going on in them, but some of the best party hostels in Amsterdam have had to get creative in order to comply with the smoking ban while not losing their party reputation (not to mention their clientele).

So how can you be sure you won’t end up booking a room in a place that’s not taking the smoking ban seriously? Honestly, you’ll be hard-pressed to find a hotel where even the lounge isn’t smoke-free, and almost every hotel room in Amsterdam is now smoke-free as well. But if you’re traveling on a budget, you’ll be looking at the city’s hostels instead – and that’s where you’re more likely to run into management trying to skirt the smoke-free law.

While in most places, smoke-free legislation is simple and straightforward, in Amsterdam it’s just not. This is a city where smoking pot has been legal and accepted for as long as anyone can remember, so to just quit cold turkey wasn’t going to be easy. Luckily for all the folks who make pilgrimages to Amsterdam just for the coffeeshops, there’s still plenty of pot-smoking going on. And luckily for the folks who’d just as soon avoid all the second-hand smoke, there are plenty of places where you can do that, too.

The 2008 law was intended to limit tobacco (not marijuana) smoking, and city officials in Amsterdam have repeatedly said they have no plans to close all the coffeeshops (with all that money they bring in!). Many coffeeshops in the city have built enclosed spaces where people can still smoke tobacco, but for the most part the marijuana smoking goes on in coffeeshops just as it always has.

The complications arise with the hostels that pretty much double as smoking rooms at times. Again, if you’re only interested in smoking weed then you won’t have any problems – but some of the hostels in Amsterdam are more lax when it comes to enforcing the smoking ban than others. If you want to be absolutely sure you’re not booking yourself into one of those hostels, then you’ll want to check out this article about the smoke-friendly hostels in Amsterdam (and avoid every hostel on that list).

As mentioned, most places are now smoke-free (with the smoke-friendly places linked above being the biggest exceptions), but some of them advertise their smoke-free status more than others. So, in addition to avoiding the places on that list of smoke-friendly hostels, booking a bed in one of these smoke-free hostels means you’ll at least have some guaranteed respite from smoke – even if you spend all the rest of your time in a coffeeshop!