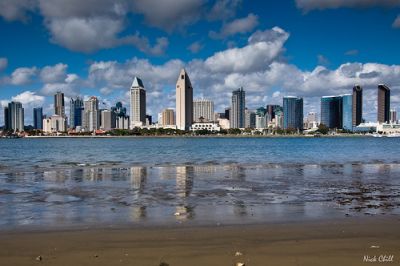 A quick jaunt from Los Angeles and a city full of fun for all ages, San Diego is an ideal U.S. city to explore. I have always loved San Diego. Lots of sunshine, tattooed surfer boys, bikes along the boardwalks and great bars—and while the San Diego I love now is not the San Diego I loved as a kid (the zoo, Seaworld, the sea lions, the beach) it is certainly a city that can please all different kinds of demographics of travelers—from wild 20 somethings to families. And, with plenty of sunshine and the summer crowds gone, fall is actually an ideal time to spend some time in San Diego.

Bike along the beach at Mission Bay, hit the bars in Pacific Beach, catch one of the great ethnic heritage festivals in September or October, or check out some of the restaurants in the Gaslamp Quarter. For those who are mourning the end of summer—blue skies and bikini weather lasts well through the autumn months in San Diego, making it an ideal place for a little getaway.

Plus, with strong completion into San Diego Airport between Virgin America, United, Southwest and Alaska Airlines it usually isn’t too difficult to find affordable flights to San Diego. I recently wrote about all of the great fall travel deals to San Diego—and from plenty of great hotel deals and cheap flights it may be hard to resist an autumn getaway to the Southern California city.

For those who want nice accommodations for not a whole lot of money, the cheap hotels in San Diego tend to be centered about 3 miles from downtown in the Mission Bay beach area. Here you can find hotels that are not only super close to the beach, but are also just a short cab ride or drive downtown and walking distance to Pacific Beach. The Best Western at Mission Bay has a three-night-for-the-price of-two offer for stays through December 31.

Another hotel in Mission Bay offering up discounted rooms is the Catamaran Resort Hotel and Spa, which is actually the property where my cousin got married just a few years ago. I can attest that this hotel is absolutely beautiful and with rooms now being offered $129/night (the same rooms can go for as much as $239/night). Jen Leo from the Los Angeles Times tested some of these rates and found that while it was difficult to find the discounted rates on the hotel’s web site, she found the $129 San Diego waterfront resort and spa deal easily for both mid-week stays and weekends on Hot Wire’s Travel Ticker web site.

Another way to save money on a trip to San Diego is to book your hotel and airfare as a package. With hotels and airlines bundling your trip for you, you’ll not only save time, but you could also potentially save money by booking one of the many San Diego vacation packages.

Deals on Cruising From San Diego

San Diego is also a launching point for many cruises heading south to Mexico to warmer waters and temperatures this time of year. While cruise line executives have been making plenty of statements on how well they are faring in the recession, it’s clear from all the crazy sales on cruises that some cruise lines are frantically slashing prices to fill up ships.

If you are still hoping to get away for the upcoming holiday weekend, there are plenty of great deals to be had on last-minute cruises departing from San Diego.

If you’ve got a little more time on your hands and want to take more than a 3-7 day cruise, you can sail for 14 days from San Diego to Miami on board the Celebrity Constellation, visiting Cabo San Lucas, Acapulco, Huatulco, Putarenas, Cristobal and Cartagena. The cruise departs December 6, and will offer passengers the opportunity to check out fabulous beaches on both the Pacific and Caribbean, as well as make stops in two continents and several countries for $899.

If you would rather opt for a shorter, more family-orientated cruise, Disney cruises also depart from the Port at San Diego. Plus, not only can you score some deals on Disney cruises (and all cruises fdor that matter) right now, but San Diego is the perfect city to explore with the kids before the ship ever leaves port. MSNBC recently ranked San Diego as one of America’s 10 Most Kid-Friendly Cities. With the fabulous San Diego zoo, Sea World, and plenty of fun activities to enjoy outside, San Diego is an ideal place to vacation with the kiddos.

If San Diego is not your thing, check out more travel deals from Los Angeles.