Euro-Style Hostels on a Budget in Buenos Aires 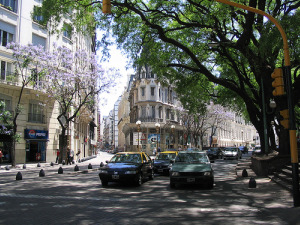 European vacations are the stuff of dreams, and are often on those so-called “bucket lists” for people who don’t travel much. It’s easy to understand why a trip to Europe is such a big deal, with all the history, art, scenery, and great food that’s found there. But what if you wanted to experience something like a European trip without spending the kind of money it usually takes to travel in Europe? Then I’d tell you to head straight for Buenos Aires in Argentina.

Buenos Aires has the benefit of being extremely European in feel (thanks in large part to its history as the landing zone for lots of settlers from countries in Europe) while being South American budget-friendly. There’s a Latin flair in B.A. that you won’t find in Europe, not to mention the tango culture, and it’s all easily accessible even on a backpacker’s travel budget (unlike some points across the pond).

In addition to the trick of having a Euro-style vacation in a country that’s not in Europe, there’s another trick to making your trip to B.A. even cheaper. The fact that this article is on a blog about hostels should pretty much give away that trick, but I’ll spell it out for you anyway – staying in one of the hostels in Buenos Aires can save you a bundle, which can enable you to extend your stay in this fantastic city (or spend it on yet more tango lessons with that gorgeous Argentinian instructor…).

If you’ve never been to Buenos Aires, you might well wonder what exactly it is about this city so far from Europe that makes it “European.” Certainly it’s not a carbon copy of Paris or Rome or Vienna, as it’s got its own style and distinct feel, but over and over again you’ll read about how European B.A. is. But why?

For one thing, much of the city looks like an Old World European capital. There are grand avenues lined with grand buildings. There are streetside cafes where people sip cappuccinos and watch the passers by. There are big green spaces where locals enjoy life and prove every long lunch hour that they’re not wedded to their jobs.

But at the root of all of this is something even the locals recognize – that while other South American countries have historical ties to native cultures in South America, the people of today’s Argentina have more ties to the lands where their European ancestors came from. The residents of Buenos Aires come largely from Spanish or Italian backgrounds, so it’s not all that surprising that they recreated what they knew in their new home.

As mentioned, however, all this Euro-influence doesn’t mean that Buenos Aires is like a transplanted European city on another continent. This city has absorbed its European ancestry and mixed it up with local flavor to produce something unique. So although you’ll definitely understand why everyone says B.A. is so European in feel when you visit, you’ll also experience things in B.A. that you wouldn’t be able to experience in any actual European city.

And you won’t have to spend a mint to do it. How great is that?

No matter what you’re into, chances are you’ll be able to do it for less in Buenos Aires. You’ll be amazed at how low the prices are to see a show, go to a soccer match, have a three+ course meal you’ll remember for years – especially if you’ve traveled in Europe and know what the prices are like there. And if you’ve got a little more money to spend, you can probably upgrade from your usual hostel options to a 1- or 2-star hotel for not much more than you’d pay for a hostel in some more expensive places. But if you really want to string your Buenos Aires vacation along, or want to save even more, you’ll still choose to stay in a Buenos Aires hostel when you go.

Thankfully, Buenos Aires has lots of hostels to choose from, all over the city. Some of the neighborhoods are more interesting to stay in than others, but the bus system is enormous (if a bit challenging to master) so you’ll be able to get around wherever you want to go as long as you’ve got a bus stop close by. A few of the more popular hostels in Buenos Aires are listed below, but there are plenty more where these came from.

Terrazas Estoril
This hostel (sometimes listed as “Hostel Terraces”) is relatively new to Buenos Aires, but it was opened by a family that’s been working in and running hostels for more than two decades – so they’re no slouches in the hostel department. It’s in a restored building close to many of the city’s main attractions, so you can walk to many of the things you’d want to see anyway. Guests get free internet access and breakfast, and because the hostel is on the top floor of the building you’ll also get to experience the lovely terraces (which give the hostel its name) for some great views of Buenos Aires.

Hostel Suites Obelisco
Another centrally-located hostel is Hostel Suites Obelisco, which is close (as the name suggests) to the city’s obelisk monument. This hostel also offers free internet access, and there’s a WiFi area if you’ve got your own laptop. The guest kitchen is great for making your trip even more budget-friendly, and the hostel’s on-site bar is the perfect place to meet and hang out with new friends.

Hostel Estoril
Hostel Estoril is right on the prominent Avenida de Mayo, close to the obelisk and the San Telmo and La Boca neighborhoods. And if there’s a spot you want to get to that isn’t within walking distance, there are bus and subway stops just outside the hostel’s front door. The TV lounge is a comfortable place to kick back and relax, especially on one of the hostel’s movie nights, but even more fun is heading out with a crew from the hostel to explore the city’s nightlife. Internet, WiFi, and breakfast are included in the price of the bed.dd

America del Sur Hostel
Located in the popular San Telmo neighborhood of Buenos Aires, the America del Sur Hostel is a great choice if you’re particularly interested in the tango culture of B.A. – because it’s the San Telmo neighborhood where you’ll find it in spades. The hostel is modern and fresh, with lots of natural light and a big outdoor patio space for relaxing or dining. Breakfast, internet and WiFi are free, and even the dorms (which only have four beds) have their own private bathrooms.

Pax Hostel
Pax Hostel is another hostel situated in the tango-rific San Telmo neighborhood. It’s close to plenty of the city’s major sights, and a block away from a subway stop for anything that’s further away. In addition to the smaller private rooms, there are dorms that sleep up to 12 – so you can save even more by booking a bed in one of the bigger dorms. Breakfast and internet access are free, as are bike rentals and international phone calls. And if that weren’t enough, there’s a lovely rooftop terrace and an on-site bar with great happy hour drink specials.