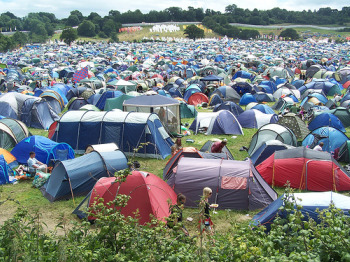 England’s annual Glastonbury Festival is the largest outdoor music festival in the world, attracting over 175,000 people to a working dairy farm in southwestern England each June.

This year’s Glastonbury Festival runs from June 23-27, 2010 and though the full lineup hasn’t been announced, you can expect big names, current stars, musical legends, and some fresh up and comers all performing on the many stages at the three day festival.

Tickets are now sold out, so if you’re among the lucky who snagged yours, check out out our Glastonbury Festival travel deals for advice on getting there and enjoying the festival cheaply.

We’ve got information on cheap airfare to Bristol, the closest airport to the festival, and budget airline deals that will help you get there from other European cities without spending a fortune.

And if you plan on driving or taking a bus, train or even cycling to the festival, we’ve got your covered there to with travel advice on how to get to the Glastonbury Festival easily and cheaply.

Photo by reds on tour