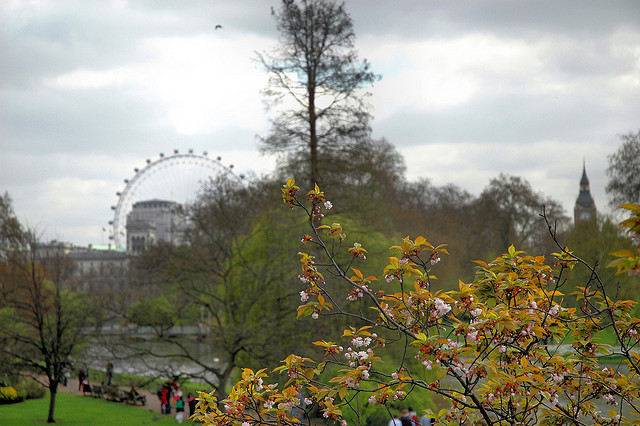 April is the month when the flowers are in bloom, so visiting the parks and botanical gardens is a pleasure. It is also the month when Easter falls (usually). Tourists are starting to buzz by now but it’s not as crowded as during summer.

As you probably know by now, England’s weather is never predictable. And spring is one of those times of the year when the weather isn’t predictable anywhere. But April is the perfect month to see the flowers in bloom. Even if you might find perfect weather when you arrive, don’t forget the umbrella and the sweater. Chances are you’ll need both.

>>read more about Weather in England

April falls during the shoulder season and , unless you plan to visit the country around Easter, the prices are lower than during the summer. However, do plan your flight in advance – 4 to 8 weeks is typically enough to find good prices.

As for accommodation, the large cities don’t exactly have “seasons” when it comes to room prices but you can find discounts online. And if hotels are too expensive, there are always the hostels to relay on.

April begins with a day of jokes and…fun. April Fool’s Day (April 1) is one of those days which are well known by everyone but when you look for its roots, no one seems to know where and why it began. It is known though that the day became popular in England in the 1700s and by tradition, you can only play jokes by midday. So, enjoy the day but try not to be one fooled.

April marks the arrival of the cuckoo, which by tradition means the spring is really here. So there are fairs to mark the event. More precisely, the Marsden Cuckoo Day in West Yorkshire, which is a festival to mark the beginning of the spring.

In most years, Easter falls in April so be prepared for a time of celebration. Head to the countryside to witness the traditional ways to celebrate Easter and the Holy Week.

April 23, St. George’s Day is also England’s National Day as St. George is the Patron of England. The legend says that St. George saved a village from a fierce dragon. In fact, St. George was a Roman soldier who protested against Roman’s torture of Christians, and just like others who did the same, he died for his beliefs. Don’t expect fireworks or parades on the National Day, though.

But April is a lovely month to explore the city. There isn’t such thing as shoulder season in London, for example, so do expect enough crowds to be hard to take good photos at the main sights, but it’s still relaxed and you can soak up the city’s atmosphere. However, smaller cities are even best to explore now as they don’t tend to get many visitors until late April.

>>read more about the Things to do in Manchester