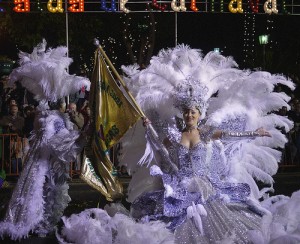 When one hears the word “Carnival” (or “Carnaval”), the city of Rio and the country of Brazil also spring in mind. But, those parades actually have their origins in Portugal , the country that settled Brazil.

The parades in Portugal kick off in February, on the week before Lent. The bulk of festivities take place three days before Ash Wednesday, although Carnival is also called “Entrudo” or the time between Epiphany and Lent. The festivities include parades, dances, live music, and colorful costumes.

The origin of the name

Carnaval has its origin in “Carnevale” , an Italian word used in the 14th century, which literally means “put away the meat”. This is linked to the Catholic Lent as Christians stopped eating meat during the weeks leading to Easter.

The Carnaval might be Christian but it has pagan roots. Back then, the festivals marked the transition period between winter and spring. As a reminder of those days, the Carnival still includes large headed and masked figures.

Other traditions dating back to the ancient festivals can be still experienced today such as: the festival means a period of peace and equality, the Carnaval focuses on reconciliation with the dead and their spirits, and “the godfathers and godmothers tradition” which is a kind of battle of the sexes.

Where to go during Carnaval

Carnaval is celebrated everywhere in Portugal but there are unique things going on in many places.

In the capital of Lisbon, Carnaval is a cosmopolite mix of parades and dances.

In Lazarim, Carnival still keeps the traditions of the Roman festival of Saturnalias. The locals wear hand-made wooden masks and their costumes are also hand made. At the end of the Carnival, the Entrudo, or Carnaval doll, is burned in a public bonfire.

Other places to visit for Carnaval include: Estarreja, Ovar, Fatima, Funchal, or the Azores.