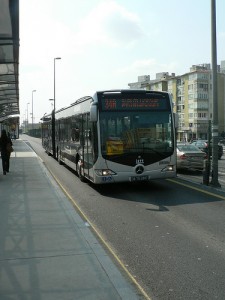 There are plenty of low-cost airlines flying into Turkey and just as many connecting the Turkish cities, so it’s fast and quite affordable to travel to/from Turkey as well as within the country by plane.

However, if you are on a tight budget, bus travel makes an excellent alternative. There are plenty of buses and dolmus offers connections even to the off the places which are located off the beaten bath.

The bus network in Turkey is excellent, with long haul buses equipped with air conditioning. However, don’t expect to find too many luxury buses, as most are economy-type but the services are good. The motorways are well maintained, but the further you get from them, the worse the roads tend to be.

Getting to/from Turkey by Bus – From Another Country

The cheapest way to get to/from Turkey and another country is by bus. It’s cheaper and faster than trains.

There are direct buses to Turkey from Bucharest and Constanta every day. Romania also offers the possibility to travel further west , offering the link to Central and Western Europe. There are also direct connections from Sofia (Bulgaria) and Athens (Greece) via Thessaloniki. Smaller bus carriers offer links to other cities in the Balkans, as well.

There are direct buses from Teheran to both Ankara and Istanbul. The travel time is about 48 h.

There are buses from Aleppo to Antakya and the travel time is only 3 h. If you need to get to Istanbul, there are direct flights from Damascus.

Getting around Turkey by Bus – from one city to another

Buses are excellent choices to get around Turkey. There is an extensive network covering the Turkish cities. The service is generally good and you need to reserve the seat. Buses are often crowded.

As a rule of thumb, the further east you travel, the less frequent the bus service will be. But even if you travel very far from Istanbul or Izmir, you’ll still be able to find a connection.

Generally, if you can choose from more operators, a bus capable of carry more passengers will offer more leg room. There are also the dolmus, which are minibuses, and they are definitely not as comfortable as the buses. However, the dolmus typically cover small distances (such as from the periphery of a major city to the centre or within a city).

Don’t be surprised to see that you are dropped off somewhere on the ring road. Sometimes, the bus companies also offer a bus to take you to the city center, but in other cases you’ll have to use the public transport to get where you need to.

Getting around Turkey by Bus – within a city

In the capital of Istanbul, there are both public and private buses. They run from 6 a.m. until midnight, with limited service after 10 p.m. There are also 24 hours lines which connect the city to the airports. Some areas of the city aren’t covered by buses, so you’ll use the tram or metro if you need to get to Sultanahmet and Taksim areas.