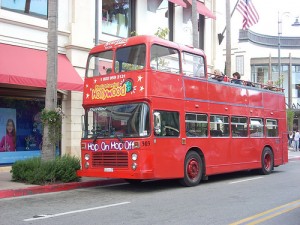 Los Angeles is a huge city with quite a lot of districts. The largest city in California is famous for its nightlife, restaurants, shopping and being home to Hollywood. Whatever you do , at some point or another you’ll be using the public transportation. And although it’s not organized as well as it is in other Western cities , buses are cheap and you can get to the major tourist attractions pretty easily.

The bus system in Los Angeles is operated by Metro (MTA) . The website is definitely the best way to figure it out as it offers timetables , maps and information about fares. The base fare is $1.50 (without connections) and the day pass is $5.00.

The buses are excellent if you travel within the central area of Los Angeles, as there are frequent connections.

If you need to get to the LAX airport, there are direct buses from various areas in the Los Angeles. A list can be found here (pdf).

Also, buses run during the night but many routes change, so make sure to check the timetable if you need to travel within the city by night. The Rapid buses have fewer stops and are efficient in the traffic.

Aside from the Metro buses, there are other companies which run buses within the city or connect to the neighboring cities (which have their own bus system). However, most of their routes are included in the MTA’s trip planner.

Aside from the public buses available in Los Angeles, tourists can also choose the sightseeing private buses (such as those run by Starline Tours ) which go by the tourist highlights. There are Hollywood tours, Los Angeles tours and many more.

And yes, there’s also the possibility to choose Hop-On-Hop-Off ticket which has 50 stops and covers as many attractions.