Both Yorkshire Pudding & the Sandwich Hail from England 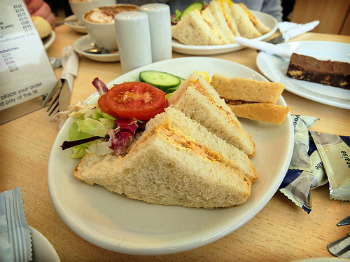 There are, of course, plenty of great reasons to visit England. It’s an easy first foreign destination for Americans, because a common language makes it accessible. There are typically lots of options on cheap flights to England because of the many international airports serving London alone.

But as a recent article about food named after cities points out, if you’re a foodie then you could do worse than make a pilgrimage to England to visit the birthplace of Yorkshire pudding and the sandwich.

Just by the name, you probably could assume that Yorkshire pudding had something to do with the area of England called Yorkshire – and you’d be right. Yorkshire pudding dates from the 1700s and isn’t a dessert, despite what the name suggests. I’ve had enough mediocre Yorkshire pudding in my life that I’d be wary about trying it again, but perhaps if it’s served in Yorkshire it’s better? One can only hope.

And then there’s the sandwich. This picnic and lunchtime staple gets its name from the Earl of Sandwich in 18th century England, who didn’t want to take a break from gambling to eat and asked for a servant to bring him a bit of beef between two slices of bread. Voila, the sandwich was born.

Whatever brings you to England, whether it’s a food pilgrimage or just the need for a good helping of fish and chips, be sure to research your options for hotels in England before you book. The country is well-known for its plethora of B&Bs everywhere, many of which serve as a budget-friendly option to more expensive hotels.