Book Your Hostel ASAP for the Vancouver Olympics in 2010 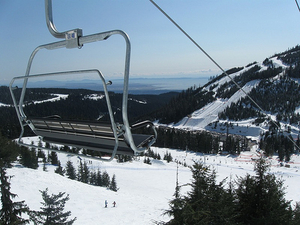 With the summer now over in the Northern Hemisphere (sorry to be the one to deliver the bad news), we’re officially on the downward slope of 2009. Which means 2010 is right around the corner, and with it come the Winter Olympics. Which means even if you’re not usually the kind of traveler who plans your accommodation months in advance you’ll want to get your bed booked as soon as possible if you’re going to Vancouver to see the games.

Canadians are famously good at the budget travel/backpacking thing, so Vancouver has lots of budget accommodation options you can choose from – including many hostels in the city center. But the fact is that Olympics groupies who’ve been planning their Vancouver trips since the city was awarded the 2010 games have already booked their beds. Sure, plenty have probably chosen more expensive hotels than you’ll be interested in, but if you’re definitely going to Vancouver for the Olympics – whether you’re planning to go to the events or just soak up the Olympic atmosphere – there’s no time to waste in securing your own cheap lodging in one of the hostels in Vancouver.

If you’re familiar with Vancouver, you’ll know that unless the Olympic committee is planning to hold the luge events down Hastings Street you’ll need to think about more than just your hostel location. Depending on what events you get tickets for, you’ll need to figure out how to reach each of the venues in question. Luckily for travelers who just want to enjoy the party atmosphere in Vancouver while it’s on the world stage, there will be lots going on right in the city and within easy reach of your hostel.

Outside Vancouver, the three places which are hosting events for the 2010 games are Whistler, Richmond, and Cypress Mountain in West Vancouver, and events in these locations include bobsleigh, luge, ski jumping, alpine skiing, speed skating, freestyle skiing, and snowboarding. Each place will require its own planning in terms of getting there and back if you’re using Vancouver as a home base, but with so many people going the same way that should be the least of your worries.

Let’s say you want to experience the Olympics, don’t really care what sport you see, and don’t want to deal with the hassle of renting a car or finding a way to the venues outside Vancouver. If that sounds like you, then you’ll want to choose an event that’s taking place at one of the venues right in Vancouver itself. Those venues are Canada Hockey Place, the Pacific Coliseum, the Thunderbird Arena, and the Vancouver Olympic Centre. The kinds of sports you’ll be choosing from include curling, short track speed skating, figure skating, and Canada’s favorite sport – ice hockey.

Additionally, both Vancouver and Whistler have what are called non-competition venues, like an Olympic Village and a medals presentation area. For more information about all these venues, see the official website for the Vancouver 2010 games.

Unlike some cities around the world, Vancouver doesn’t have a list of hundreds of hostels you’d need to page through in order to exhaust your research. Still, it’s easier to plan a trip when you’re pointed in the right direction. So here are a few of the hostels in central Vancouver that are worth considering for any visit to Vancouver – and if it’s during the Olympics, all the better.

C&N Backpackers Hostel – This hostel has been in the same building for 20 years, and remains one of the city’s most popular. Budget travelers of all types are welcome, including families with kids, and the hostel is within walking distance of some of Vancouver’s tourist attractions as well as public transportation.

HI Vancouver Central – One of three HI hostels in Vancouver, the HI Central is right on Granville Street and within easy walking distance of many local attractions, not to mention lots of restaurants and bars. The on-site hostel bar is also a good option, if you just don’t feel like walking outside. There are private or dorm-style rooms available, but even the dorms aren’t so big as to feel institutional.

HI Vancouver Downtown – Another HI hostel in Vancouver that’s worth looking at is the HI Downtown location. It’s downtown and a short walk from some of Vancouver’s top attractionss, but it’s in a relatively quiet residential area. They’re running a promotion right now where you’ll get a 7th night free when you book 6, and it lasts through March 2010 – which is a great deal if you’re planning to stay for the duration of the games.

Cambie Hostel @ Seymour – Cambie is in downtown Vancouver right in the heart of all the restaurant, bar, nightclub, and sightseeing choices you could ever want. Although there’s an age limit at this hostel (you have to be between 19-35 years old), the rooms here aren’t big dorm-style rooms. Most of them, in fact, sleep 2-4 people, so even though you’re paying dorm-room prices you’ll feel like you’re in a private room.

SameSun Backpacker Lodge Vancouver – SameSun is another hostel right on the lively Granville Street in central Vancouver, and it’s known for being a bit of a party hostel. The on-site bar (called The Beaver) is a great hang-out spot, and in addition to the regular drink and food specials there are also nights where the bar turns into a disco, complete with a live DJ.