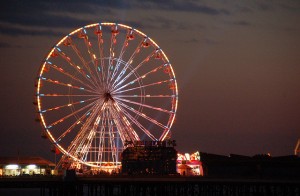 In the years before 1879, the streets of Blackpool were graced with mere gas light, but that year everything changed, for the Blackpool Illuminations began as an experiment in the use of electricity to power street lighting. On the 19th of September, 16 Robey engines were put into use for powering eight dynamo-electric machines that lit eight arc lamps spaced out along the Promenade. Somewhere between 70,000 and 100,000 visitors came to see what was then called ‘artificial sunshine’ and it is widely believed these simple arc lamps were the world’s first electric street lights.

It was a huge success that continued to grow year upon year with special events and Royal visits taking place in Blackpool that encouraged the use of more than 10,000 lights until the spectacle reached its present day length of a little under six dazzling miles along the Promenade. There are various themes spread throughout the route and so complex are the designs that it now takes 45 staff members an entire year to ensure that all the lights are ready and the displays are fully functional. So vast is the amount of equipment required that it is estimated at a value of more than £10 million!

Switched on every year at the end of the Summer Season, the Illuminations light up Blackpool for 66 consecutive nights and those who are chosen to press the (now famous) button to switch it all on, consider it a great privilege. Each year the identity of the lucky person is kept tightly under wraps to make it even more exciting, though it is often a prominent celebrity.

The Switch On date for 2011 is September 2nd and as tickets are required for that particular night, Blackpool hotels will fill up fast, so some forward planning would definitely be required to avoid disappointment.