The region of Antalya , also known as the Turkish Riviera, has some of the best preserved Greek and Roman ruins in the world. Unfortunately, they tend to be overlooked by most visitors, but those who take the time to plan a visit are impressed with the well preserved ruins. Also, some of the sites are quite off the beaten path so you can explore them without bumping into fellow travelers at every step. Turkey is also the place where you’ll find the famous sites of Ephesus, Pergamon and Troy. 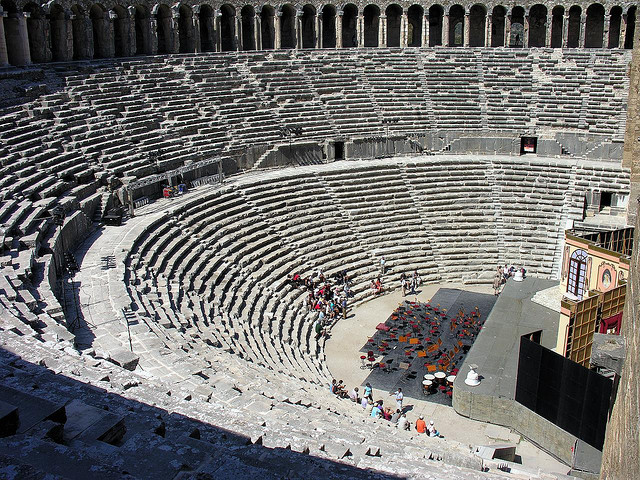 It was an ancient Greco-Roman city located in Asia Minor, 7 km from today’s Serik. It is known for having the best preserved amphitheater from antiquity with a diameter of 96 m, which provided seating for 7,000 people. It was built by a Greek architect during the rule of Marcus Aurelius.

The theatre is still in use today, holding the annual Aspendos International Opera and Ballet Festival.

>>read more about 10 Best Roman Ruins Outside of Rome 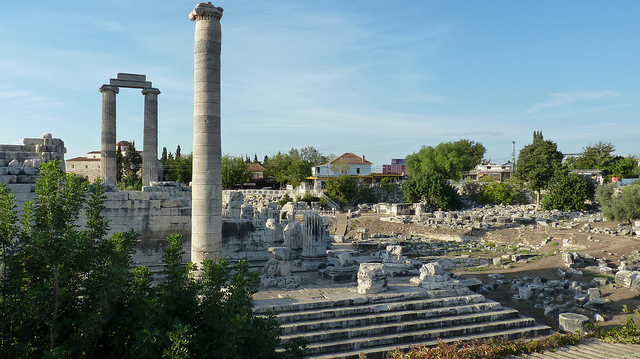 It is an ancient Greek site, containing the remains of the Sanctuary of Apollo and is located near modern day city of Didim (and the resorts of Bodrum and Kusadasi). It was one of the most important oracles in the ancient Hellenic world , second only to Delphi. The original temple was destroyed by the Persians but Alexander the Great rebuilt it in around 334BC.

Today, a range of ruins can be visited, including columns and remains of ancient tunnels.

It was a vibrant Greek ancient city, located near today’s Selcuk (and the resort of Kusadasi). It contains some of the best preserved Greek and Roman ruins in the Mediterranean.

Built in the 10th century BC, the city grew until 650 BC when it was attacked by the Cimmerians. The settlement was rebuilt and thrived again but later was conquered by the Persians.

Today, the well preserved site offers an amazing opportunity to walk among ancient Roman and Greek houses, buildings and stadiums. The famous Temple of Artemis is only represented by a column. The Library of Celsus is one of the most impressive buildings on site. 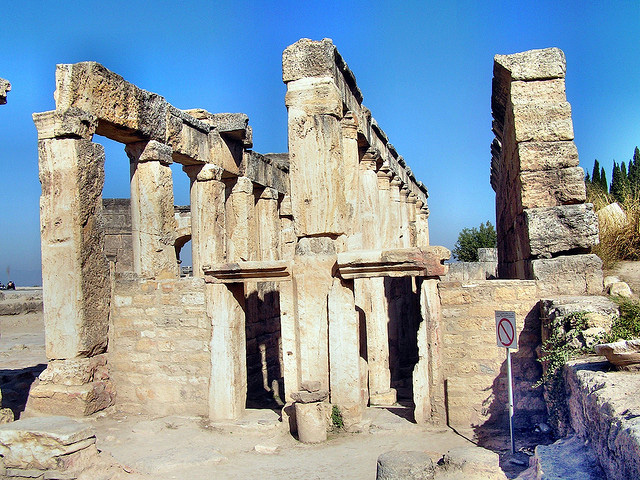 It is an Ancient Roman city and spa, located near today’s Pamukkale . The site is famous for the hot springs , which were thought to have miraculous healing properties. Most of the ruins on site date from the Roman period ,but the Hellenistic layout can also be clearly seen. And it’s still possible to take a dip in the hot springs. 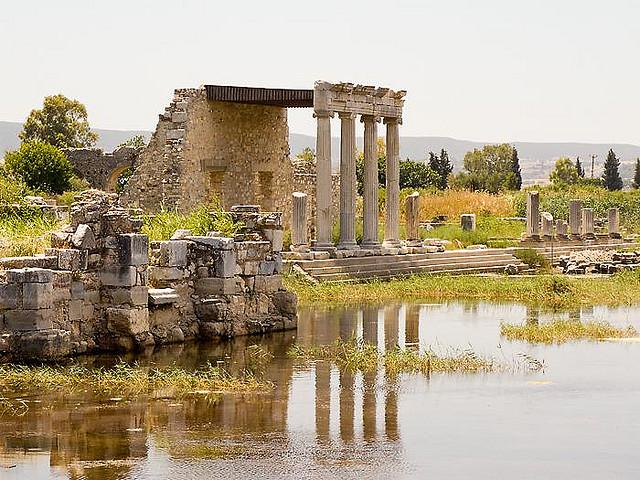 It is an Ancient Greek city, located near today’s Balat. It still has an impressive theatre but the other ruins are few. 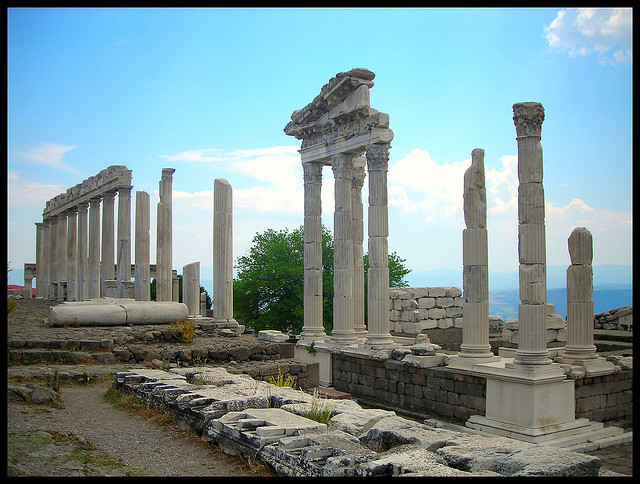 It was a famous ancient Greek city located in today’s Mysia region of Turkey, close to the city of Bergama. It was cited in the book of Revelations as one of the seven churches of Asia. The upper Acropolis included the Great Altar of Pergamon (which can be seen in a museum in Berlin), The Hellenistic Theater, the Sanctuary of Athena , The Royal Palaces , the Temple of Trajan, the Upper Agora, the Roman baths and other structures. The Lower Acropolis included, among other buildings, the Temple of Demeter , the Sanctuary of Hera and the Lower Agora. 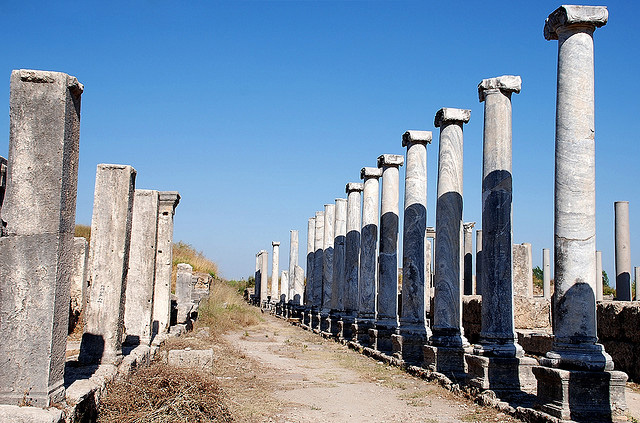 It is a site containing mostly Roman ruins and is located near today’s Aksu (and Antalya resort). It has a history dating back to the Ancient Greek times as it was founded circa 1000 BC. The large theatre, the Roman agora , the bath and the necropolis can still be visited today. 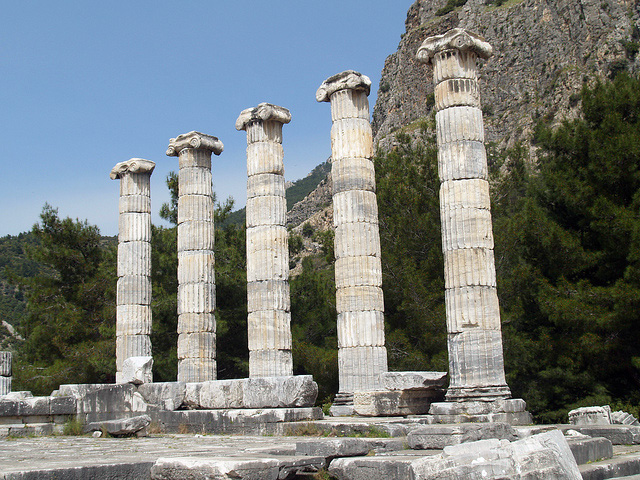 It is an Ancient Greek city located near today’s Gullubahce (and the resorts of Kusadasi and Bodrum). It is one of the most important sites in the area , close to both Miletus and Ephesus. But it is located quite off the beaten path, providing a much relaxing experience (without the huge tourist crowds).

The Temple of Athena, the ancient theatre and the wall are still well preserved. You can also see the Roman baths and gymnasium, as well as the ruins of an Ancient Synagogue. 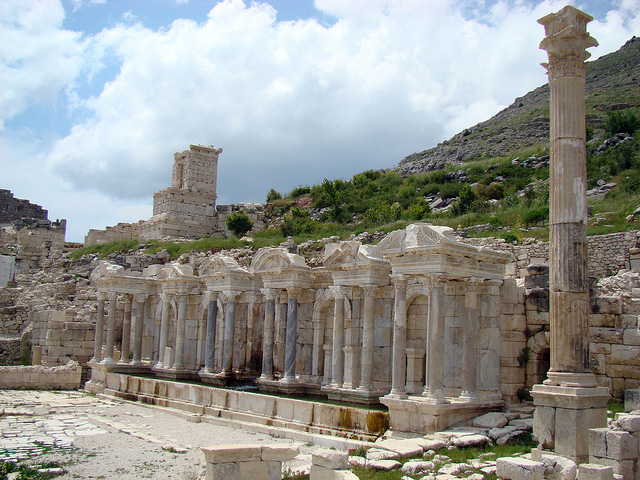 The site contains mostly Hellenistic and Ancient Roman buildings and is located near today’s Aglasun. The Fountain of Antoninler is one of the best preserved ruins on site , but the theatre is not doing that bad either. You can also see the remains of the library, tombs , baths and temples. 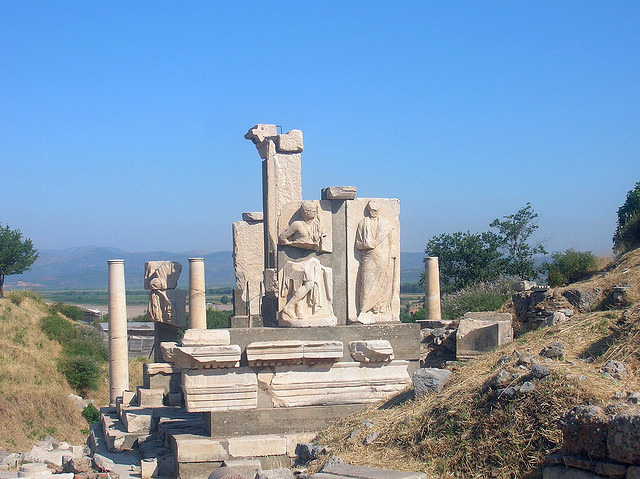 Famous in antiquity, Troy stands in Turkey near today’s city Canakkale. It is one of the most famous and historically significant sites in the world, known to be the location of the Trojan War. The most popular fictional story is written by Homer in The Iliad and goes like this: the Greeks besieged Troy after Helen, the wife of Sparta’s king, was taken by Paris of Troy. However, historians believe that the reason of the Trojan War was a commercial rivalry between people of Troy and Mycenaeans.

The vast ruins can still be visited today. Each part of the site is numbered and is correlated to a specific period of time. And yes, the famous walls can still be seen. The site has a mix of Greek and Roman buildings, many built by Alexander the Great and Augustus.